So what does this mean? Just how are ants, coneys, locusts and lizards wise? We can actually learn a lot from these animals and insects. The ant demonstrates preparation. The coney (also called rock rabbit which is a rodent-like mammal with feet that have hoof-like toes) demonstrates wise building. Note: a crag is a steep rugged rock or peak. Locusts demonstrate cooperation and order. The lizard shows us fearlessness.

Go about your day today as the ant, coney, locust and lizard: Be prepared, reach for the heights, get along with others and don’t live in fear. May God’s blessings continue to rain upon you! 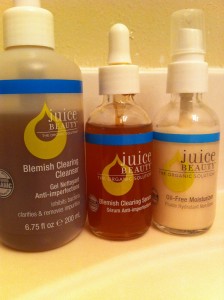 Admittedly, I did not follow the directions to a T. That is, I only cleansed and moisturized my face the recommended twice daily for about a week. After that, I dropped it to just once a day because it is something about the scent that does not agree with me. This is an organic product and there is definitely an earthy scent. While not altogether unpleasant, it still seemed to stay with me for a while after I cleansed my face. I sometimes thought I could actually taste it, but that may have just been my imagination.

The Blemish Clearing Cleanser will get your face clean. Squeaky clean. I used it with my Clarisonic Mia and was amazed at how bright and healthy my skin appeared. Per the instructions, I followed the Blemish Clearing Cleanser with the Blemish Clearing Serum. The serum is dispensed through a dropper. I used four drops, rubbed in my palms and applied over my face and neck. I haven’t seen any change in my blemishes, though. Then again, I am not using it twice daily, as recommended. Lastly, I applied the the Oil-Free Moisturizer. The moisturizer is excellent; it dissolves into my skin leaving it very soft.

The only issue I have with Juice Beauty is the price. I ordered directly from the Juice Beauty website. The Blemish Clearing Cleanser is $22. The Blemish Clearing Serum is $29 and the Oil-Free Moisturizer is $28. I’ve seen facial products that cost a lot more than this, but, to me, it is still pricey. I guess I paid for the “organic-ness” of it all. Which begs the thought that one could pay a lot less and still receive the same results by choosing a less expensive product line. A plus is the product will last a while. This post’s picture shows just how much I have left even after a month’s use

Overall, I give Juice Beauty four out of five stars. It really will leave your face radiant and soft to the touch. Since I feel one should give facial products longer than one month’s use to realize the full results, I plan to continue using Juice Beauty until it runs out. I’ll post a follow-up review then.

Have you ever found yourself short on ingredients but long on hunger? I found myself in this predicament last Saturday. After completing a quick inventory of my fridge, freezer and pantry, I tallied a 12 oz package of spaghetti, one sleeve of crackers, cream soups, chicken breasts, celery, onions, 2 bell peppers – green and red, garlic and a half bag of shredded cheddar cheese.

I scoured the cooking websites for inspiration but soon discovered I didn’t have enough ingredients for recipes pulled from my search results. Although I was hungry, I didn’t feel like schlepping to the store. What to do? Determined and motivated by a growling stomach, I decided to make a hodgepodge of the various recipes I found and develop my own.

First, I seasoned the chicken breasts with seasoned salt, pepper, and onion powder. Placed it in a pot with one stalk of celery, half an onion and half a green bell pepper. I covered with the chicken and veggies water and brought to a boil. I then lowered the heat and let simmer 1-2 hours. Once done, I removed the chicken breasts from the pot so they cool enough for me to handle. I reserved the stock.

I cooked the spaghetti according to the package instructions, drained and set to the side.

While the spaghetti was cooking, I chopped the remaining half of the onion, the red bell pepper, and two cloves of garlic. I sauted the vegetables in a little butter until they were tender. I added one can of cream of chicken soup and one can of cream of mushroom soup to the vegetables. I then added half a can of milk and about half a cup of chicken stock, stirring until well incorporated. I shredded the chicken and added it and the cooked spaghetti to the soup mixture, making sure the soup coated the chicken and noodles. I then added the remaining the stock. I poured the mixture into a 9×13 pan and sprinkled cheddar cheese on top. I placed the pan in a 350 degree oven and baked for twenty minutes.

While the dish was in the oven, I crushed a half sleeve of crackers (I used Ritz Crackers) and melted approximately 1/4 cup of butter in a saucepan. I removed the dish from the oven, sprinkled the cracker crumbs on top of the cheese then drizzled the butter over the crumbs. I placed the dish back into the oven and baked for ten minutes.

I was a bit nervous before the first bite but, boy oh boy, it was good. I was surprised because this is the first time I have ever variated from a recipe and it actually worked.

I have been making the effort to eat healthier, so I realize the processed foods, butter, etc. goes against that goal. I wouldn’t eat this every day nor every week for that matter. However, it is a simple and satisfying meal that was beyond easy to prepare. Given the shortcuts I took, I can’t call this a true Chicken Tetrazzini. For a more authentic dish, try this version by Food Network’s Giada De Laurentiis.

If you decide to try my recipe, let me know how it turned out. Or, offer ways to kick it up or make it healthier!

“Now all has been heard;
here is the conclusion of the matter:
Fear God and keep His commandments,
for this is the whole duty of man.
For God will bring every deed into judgment,
including every hidden thing,
whether it is good or evil.”
Eccl 12:13-14

Don’t be discouraged in your walk with the Lord. God sees all and will judge both the righteous and the wicked. Stay faithful, even when it feels like you are the only person doing so.

May the Lord bless and protect you today.