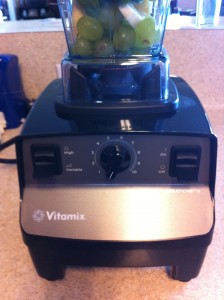 As I officially enter middle age, I’ve been thinking a lot about healthy eating, specifically the nutritional benefits of consuming raw foods. I’ve finally made the transition from thinking to action and, as a starter, am drinking green smoothies.

Green smoothies incorporate leafy green vegetables such as spinach and kale with fruit. Blending the vegetables rather than cooking them helps retain their nutritional value.

After researching many sites and manuals for green smoothie recipes, I decided to strike out and create one of my own with the fruit and vegetables I had on hand. I blended together 1/2 cup of water, 1 navel orange, 1 cup of white grapes, 1/4 of a banana, 1 cup of fresh spinach and 1/4 cup of ice cubes. 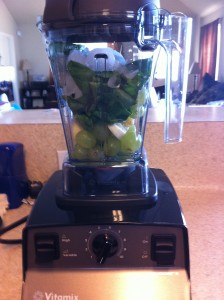 I’ve always had a natural aversion to creamy green foods. I’ve never had split pea soup. I was in my thirties before I ever tried guacamole. So, after pouring my masterpiece in my glass, there was a brief hesitation. However, knowing I was embarking on a journey that was going to make me healthier, I took a sip. 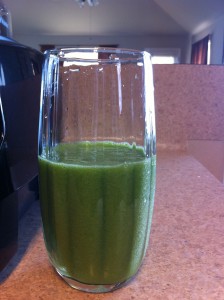 And loved it. There wasn’t a strong spinach taste. It was smooth and fruity and delicious. I plan to variate the fruit and greens to develop different flavors. In addition to the green smoothies, I also concocted a fruit smoothie made with a navel orange, green grapes and frozen peaches. Delicious.

If you’ve been considering green smoothies, go ahead and take the plunge. Don’t let the look fool you. Green smoothies are quick, easy and tasty. They are also healthy. Make one today!

Michelle Obama and Dr. Jill Biden were booed at the NASCAR Sprint Cup Finale in Miami. They were there presented as grand marshals and were there to show support for military families.

Much speculation has gone into why they were booed, and there have been many valid points given. Deep down, however, everyone knows the real reason why they, no scratch that, Mrs. Obama, was booed. Thankfully, Rush Limbaugh has finally led that humongous elephant out of the room.

Those darn Obamas are a group of uppity blacks. Hey, black people are OK to dance and sing and play sports, but they have no business in politics. That’s just crossing the line. And that fact that we, the American people, have to refer to them as “Mr. President” and “First Lady” is just disgraceful. The reality of a black family living in the personal quarters of the White House is unconscionable. Who do they think they are?

If my tone seems sarcastic, it’s because it is. How much disrespect does one family have to endure? It was a shameful showing for NASCAR and the country for the crowd in Miami to boo the First Lady and Dr. Biden. I have one question, though. If both women were booed, why is the focus on Michelle Obama? Because everyone knows she was the true target of the crowd’s disdain, as much for her husband’s controversial politics as for the color of her skin. Yes, I went there. Limbaugh noted Mrs. Obama’s fiscally irresponsible spending in his polarizing support of the crowd. I can remember former First Lady Nancy Reagan – wife of President Ronald Reagan who the current crop of Republican contenders cite as the greatest president – was also criticized for her spending and redecorating while her husband was in office. His administration championed budget cuts while his wife spent millions received through “donations”. She was known to favor glamorous gowns and expensive china and did not appear to have any regrets even though the country was in a recession during that time as well. Despite all of this, I don’t think one person in that NASCAR crowd would have booed her had she been presented as grand marshal. You want to know why? They know it would have been disrespectful to her as a former First Lady and as a person, just as it was disrespectful to Mrs. Obama.

I won’t even delve too deeply into Newt Gingrich’s plan to have children in disadvantaged neighborhoods work as janitors in their schools to reinstitute the value of work. The value of work and a hard-earned dollar should be instituted across the board so that things like this don’t happen to the privileged.

America has become a divisive, greedy, rude and disrespectful nation where not even the office of the presidency is shown respect. This is a very sad commentary of our times. 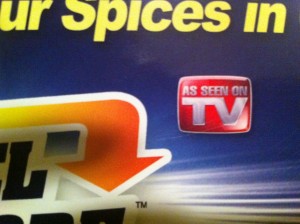 I am an As Seen on TV junkie, but managed to steer clear of the Swivel Store – a trademark of Merchant Media LLC. I was intrigued with the concept of swiveling organizer, but didn’t take the plunge and buy it.

The Swivel Store is described as a space-saving cabinet organizer. The TV commercials for the product stress its use as a spice rack, which appealed to me. I have a lot of spices and hate having to claw my way through to the spice I need. The fact that it only takes up four inches of space was an added bonus. So, while walking through a major retail chain’s As Seen On TV aisle I gave in and purchased the Swivel Store for a little under $20 before taxes.

I was very excited to use the organizer until I pulled it out of the box. While, the width is four inches, the height and depth is 11. The shelves in my cabinets are 9 inches apart.

I considered readjusting the shelving so the Swivel Store would fit, but thought that was too much work for a product claiming no assembly required. Note: There is no actual assembly required for the Swivel Store. I wondered how in the world I missed the dimensions. After a review of the packaging, I figured it out; the dimensions are not on the box. They are in the included instructions – number 2 under “To Install”. I also see the dimensions are on the product’s website. Normally, I check out the website. This time I didn’t, much to my regret. 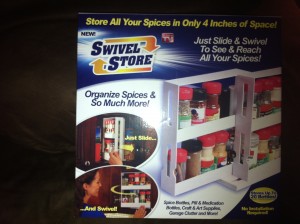 But you can’t keep a good gal down.

Since it wouldn’t fit in my cabinet, I placed it on the top shelf of my pantry. The Swivel Store works as advertised. It is a functional and neat product. My spices are organized and available with a swing of the shelving instead of an extended search on my part. It would be handy to have the now-organized spices in the cabinet closest to my stove rather than in a pantry several feet. Although I feel the dimensions should definitely be on the packaging, I assume some responsibility for not doing proper research before purchasing.

All in all, I am pleased with the Swivel Store and recommend it. Just measure your shelf spacing first.