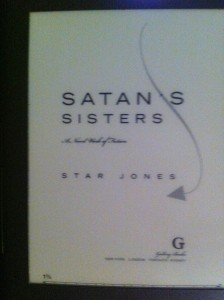 I can admit to being skeptical. Star Jones may be a gifted legal analyst but fiction writer? I had even gone on record to family and friends insisting that I had no intention of reading, let alone purchasing, Ms. Jones’s foray into storytelling. But the more I heard about the book (mostly via Twitter), I decided to go against my better judgment and download the tome to my Kindle. Besides, the title – Satan’s Sisters – intrigued me.

Good thing I am a person who can also admit to being wrong.

I actually enjoyed this debut novel. Satan’s Sisters follows the lives and misadventures of the ladies of The Lunch Club, a television talk show hosted by five women from varying racial and age groups who offer opinions and insight into current events and social mores. Maxine Robinson, a no-nonsense, arch-competitive, trailblazing journalist who rules the show with intimidation, founded The Lunch Club. Seated beside her are respected journalist Whitney Harrington, young, hip supermodel Shelly Carter, lawyer Dara Cruz and comedian Molly Stein. Behind the public faces of these dynamic women are private secrets (drug addiction, and extramarital affairs) and heartaches (loneliness and grief over a child’s suicide) that threaten to crumble their carefully crafted images. And the one instigating the crumbling is former co-host Missy Adams, who has written a blistering tell-all that sends Maxine and others into a maddening dash to discover just what – and whose – secrets are being spilled.

While Satan’s Sisters may not be a literary masterpiece, Ms. Jones is a good storyteller. She obviously took heed to the oft-offered advise to write what you know as it is evident this novel is culled from her experience as a co-host of The View. While reading, I found myself trying to figure which real-life person each character was based upon (Maxine – Barbara Walters?? Whitney – Meredith Viera??). I was surprised, however, to find the novel is quite a sexy read. Not overly explicit but definitely spicy. If you are sensitive to such writing, you may find yourself skipping over a few passages. The only criticism I have is the plot is a little over the top and the ending is too tidy for some characters and non-existent for others. There is also a subplot involving an illicit affair between producers that, although enjoyable to read, doesn’t add to the novel.

In closing, Satan’s Sisters is a delightfully dishy novel that would be perfect take-along for the upcoming beach and vacation season. On a five star rating system, I give it 3 ½ stars.